The Oxford Women's Leadership Symposium brings together scholars of women's studies from a wide background, both internationally and in terms of their specific research interests. This allows for broad engagement and is different from narrowly specialist conferences. The great majority of past participants have found this approach rewarding and professionally helpful.

You are invited to make a presentation and lead a discussion on an aspect of women's studies, or you may wish to participate as a non-presenting observer. Your disquisition must adhere to an abstract of about 300 words approved by the Programme Committee of the Symposium.

You are also encouraged to submit a full paper, in keeping with your abstract, which may be published in an appropriate journal or book of conference proceedings. All papers presented for publication or inclusion in books or sponsored journals will be subject to peer review by external readers. 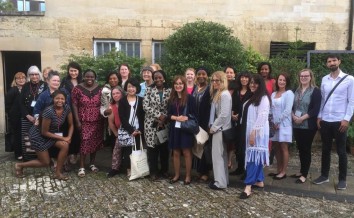 The Oxford Women's Leadership Symposium is pleased to announce Annette Mountford as the Keynote Speaker for the August 2022 meeting.

Annette Mountford, MBE, was the Chief Executive of Family Links from 1997-2015. Prior to that she worked as a Health Visitor for 13 years, and then combined her experience in health, education, and parenthood to introduce the Nurturing Programme (NP) to the UK in 1992. The NP promotes emotional literacy, and emotional and mental health. She has led the Family Links team in adapting the Nurturing Programme (NP) to meet national curriculum standards; in anglicizing the NP for parent groups in the community; and for schools, prisons, Muslim parents, and parents of teenagers. She helped create the Parenting Puzzle book for parents. Annette developed a national training programme for practitioners working with parents and children in education, health, and the community. She has written an Ante-natal NP, which is now being rolled out nationally. She was honored with her naming to the Queen's List, in 2012, with the MBE, Members of the Order of the British Empire.